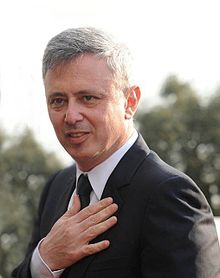 Suleiman Frangieh was born in Zgharta, Lebanon. He is the son of former minister Tony Frangieh who was assassinated in the Ehden massacre in 1978 and grandson of the former Lebanese President Suleiman Frangieh and as such, carries his grandfather's name.

Suleiman Franjieh's grandfather brought him to Syria after the Ehden massacre, which was perpetrated by rival Maronite Kataeb forces. In Syria, Suleiman was taken under the wing of Bashar al-Assad's older brother Bassil. His friendship with the Al-Assad family has remained close since then

Suleiman Franjieh's political career began when he was 17 years old. In 1982, he became leader of the Marada Brigades. The party disbanded its militia to become a political group following the disbanding of armed militias after the Taef Agreement. Marada began to participate in social, cultural, education, health and political affairs.

He entered the Parliament for the first time on 7 June 1991 and was then the youngest MP. He was elected for three successive mandates in 1992, 1996 and 2000 and ranked first in the caza of Zgharta- Zawiah in the three aforementioned electoral sessions despite the different prevailing electoral laws: the goveranorate basis in 1992 and 1996 and the intermediate circonscription in 2000. He was candidate to the Maronite seat in the caza of Zgharta in the second circonscription in the north during the elections of June 2005. He ranked first in the cazas of Zgharta, Koura and Batroun but did not win the elections which took place on the basis of the 2000 electoral law.

Suleiman Franjieh joined mourners gathered in front of Beirut's city palace to pay his final respects to Rafik Hariri who was killed by a bomb on 14 February 2005. His presence made many uneasy, since it was his ministry that was overseeing the investigation into Hariri's assassination

During the Lebanese Parliamentary Elections of 7 June 2009, Suleiman Frangieh was elected again for the fourth time as a Member of Parliament for the seat of Zgharta-Zawyieh. He won the seat along with his two running partners Estephan Douwaihi and Salim Bey Karam. Together, these three politicians, along with the addition of MP Emile Rahme, formed the 'Free and Unified Lebanon' bloc in the Lebanese Parliament.

Suleiman is the father of two children from a first marriage with Marianne Sarkis; Tony (1987) and Bassel (1992). Suleiman Fragieh has been married to Rima Karkafi since 2003 who has given birth to his daughter Vera (2007). He resides in Bnachii, a small town right next to his hometown of Zgharta. He is a close friend of Syrian President Bashar al-Assad

Of his hobbies, the followings can be stated; Photography, Aerial photography, Aviation, Sea and diving, Environmental concern, Fishing and Ski.

Oops, you forgot something.

The words you entered did not match the given text. Please try again.

Reply Michaelsoync
5:06 AM on October 12, 2017
http://cialisnewpilles367.com - is clomid more effective with metformin
, hello and buy!, hello and buy!

Reply Jamosseing
5:34 PM on May 30, 2021
Superb material. Thanks a lot.
https://topessaywritingbase.com/

Reply Jamosseing
10:38 AM on June 6, 2021
This is nicely put! .
indian pharmacy
https://speedy-griffin.webs.com/apps/guestbook/